How To Play Foosball 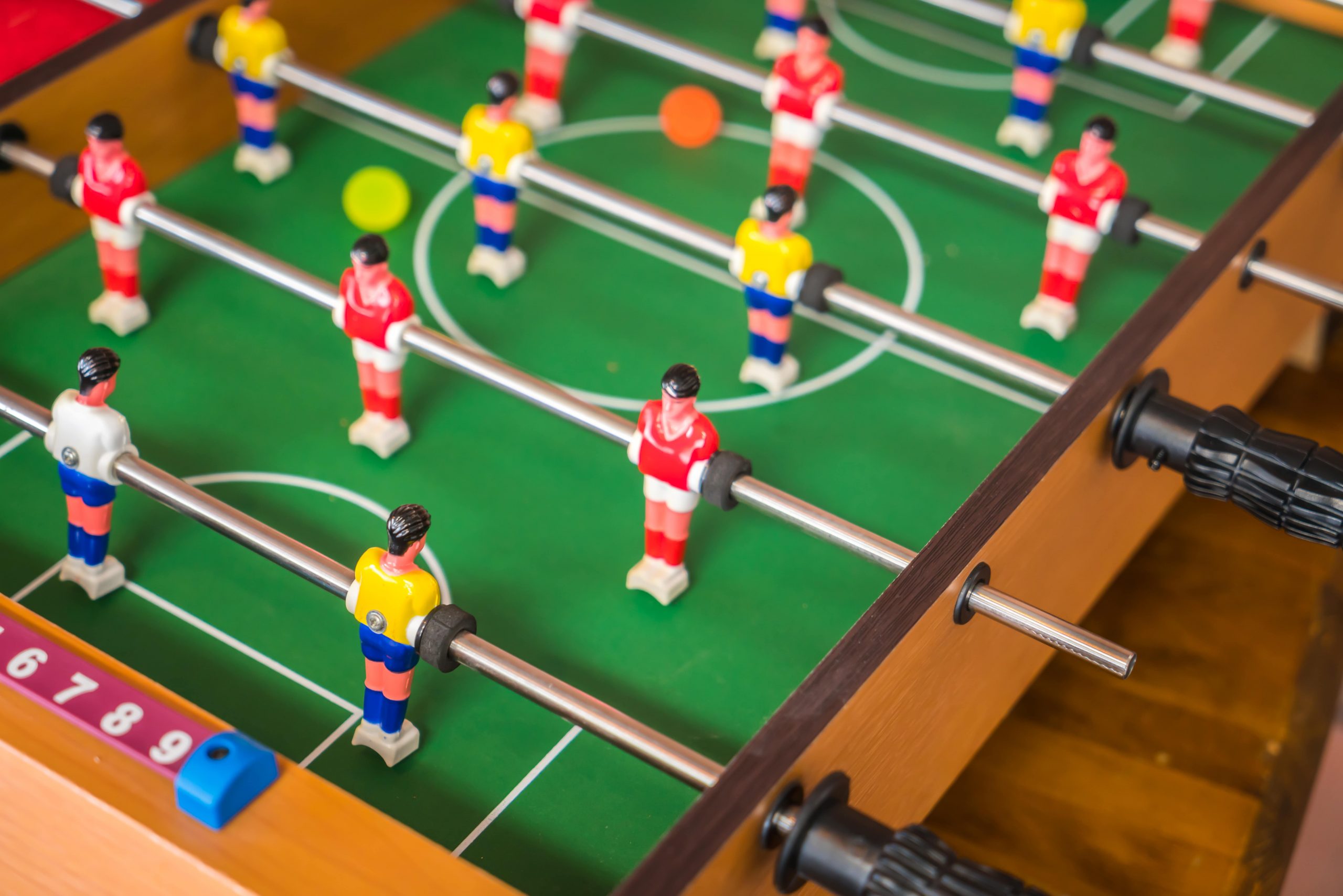 Foosball, for the uninitiated, is like football but in miniature form. More precisely, it is miniature football played on a table. Its history is rather murky but what is known about this game is that it is a great way to enjoy your time with friends (or some friendly rivals) and get your competitive spirit up. But what is it exactly and how do you play it? Let’s take a closer look at the intricacies of this game.

The name of the game – foosball – is American, although some sources will argue that a similar game was in play in Europe beginning in the late 1800s. It was commercialized by Larry Patterson in 1962 using a table made in Germany. It wasn’t long before the foosball table became a popular point of gathering in many homes, bars, and cafes in the U.S. and elsewhere.

How to Play Foosball

To learn how to play foosball, it is important to first understand how the game table is set up. A regulation-sized foosball table is 54 to 56 inches long, 29 to 30 inches wide, and 34 to 36 inches high. These are usually the size dimensions used during adult tournaments. However, foosball tables can come in a number of sizes and shapes. Regardless, the game is played in much the same way as most games with balls are – to bring the ball to the goal of the opposing side and gain a score. In a foosball table, there are eight (8) foosball rods that run parallel to one another at equal distances across the width of the table. On these rods, there are figures of players attached.

The rods can be turned or rotated to manipulate the figures so they hit the ball to bring it where you want it to go. The rods can also be pushed or pulled left to right. By manipulating the rods and the figures on them, players can control the ball so it can be passed, blocked, or “kicked” towards the goal.

In a tournament game (this is usually what is played in bars as well), there are a total of nine (9) balls to be played. The first player who reaches 5 goals is considered the winner.

The best way to play foosball like the pros is to master the basic foosball techniques for beginners before learning advanced foosball techniques. You not only have to learn how to play offense but you also need to learn how to play foosball defense. The game requires fast eye-hand coordination and quick reaction. The ball can reach high speeds if it is “kicked” by a figure towards the opposing team’s side.

While it can be tempting to try to learn every one of these shots, it is far better to master just one or two (three tops). Of these shots, the pull and snake shots are the most popular but of course, learning a trick shot can be a big help.

When it comes to foosball tips techniques are an important component. In foosball, knowing how to be on the defense is as important as being on the offense. Some of the most important defensive techniques you need to learn, for example, are blocking techniques.

A key move you need to practice is the 2-rod defense. Using two rods next to each other, line up the figures so that they overlap. This gives you a better chance to defend your lines because it keeps the figures in close proximity to each other.

To use the two-bar defensive rod, you will have to tilt the rod back sometimes to keep your figures away from the playing floor. This will help prevent ricochets, allowing you a clearer view of the ball. When the ball is on the rebound, use the 2-bar defensive rod to save and block the ball. A key technique to learn is to use one hand to move two rods at one time. You may have to stretch your pinkie finger and thumb a bit but once you become used to it, you can easily control the rods this way.

How to Play Human Foosball

To learn how to play life size foosball, you simply have to recruit a sufficient number of people (usually a minimum of 10) and provide the necessary equipment for the game. You will need:

-A ball, preferably one that has a good response when kicked but will not hurt the players

Use masking tape or chalk to mark the lines across the floor on each side of the playing floor. You may also use painter’s tape for this. Give the players a pole to hold onto and have them stand on the line marked on the floor. The players must remain within the allowed distance and the poles must be of sufficient length. If necessary, use duct tape to join two or more poles together to achieve the desired length.

Next, designate a goal on opposite ends of the floor. A goalie from both teams should take their place in front of the goals. Position the players this way:

To start the game, a coin flip may be performed. The winning team may choose to serve the ball or give the turn to the opposing team. Once the game starts, players must keep their hands around the pole as long as the foosball is in play. They may use their elbows to control the ball but their hands must remain around the pole. No player is allowed to play with their chin lower than the bar.

The ball must be played low. If it hits a player above the shoulders, this can be considered a foul and a penalty kick may be performed. One 15-second substitution per team is allowed during a period. When a team calls for substitution, players may be moved to a different pole. All players in the team calling for a substitution must have their hands around the pole and in position within the 15-second period. If not, the team commits a foul. Although human foosball is usually played for fun, having a referee to supervise the game can be helpful to keep the rules in place.