The Foosball Game – What You Need To Know 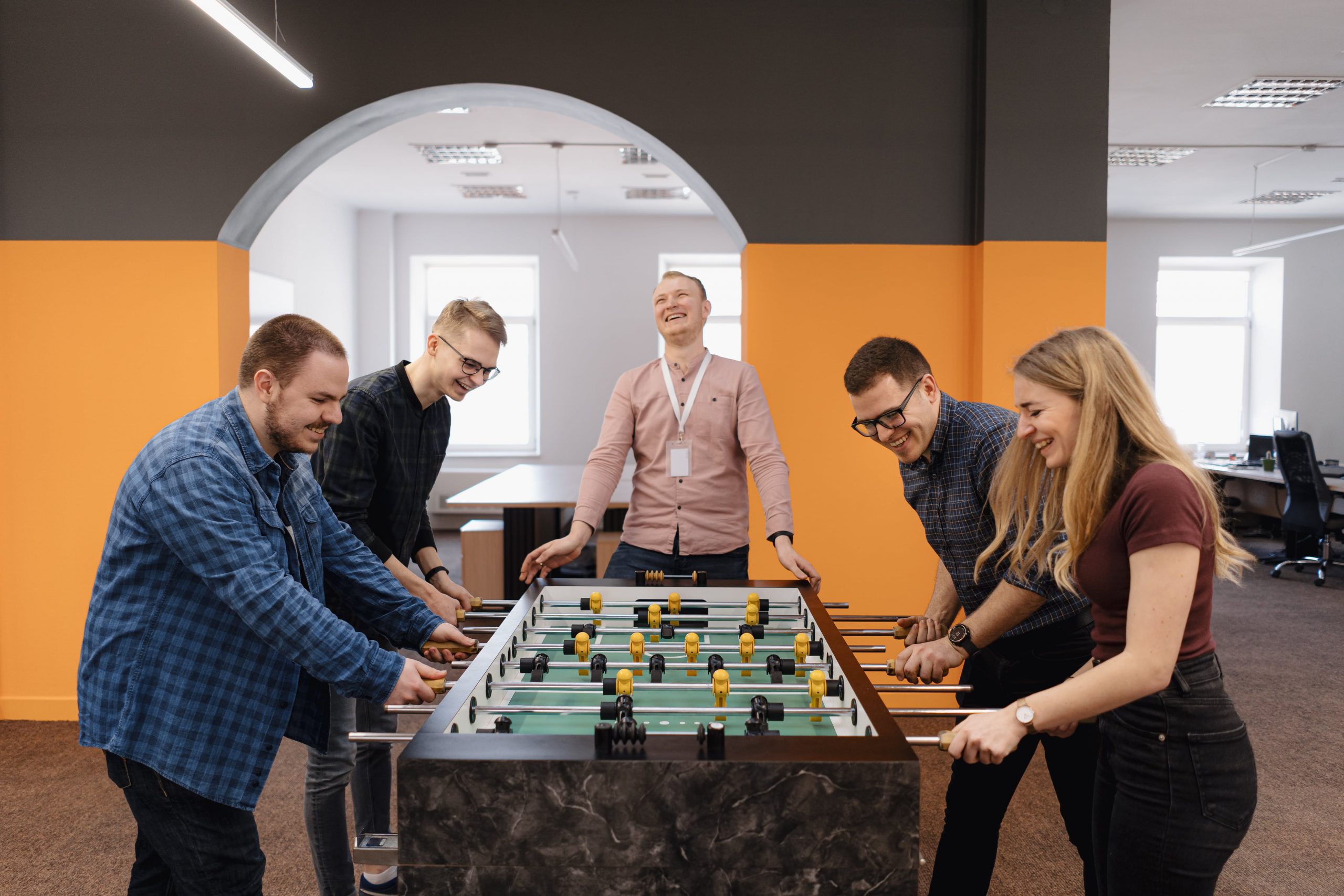 Usually, a foosball game pits two players against each other, although it can be played by competing teams. The game itself is a tabletop version of soccer. There are two goals on the  tabletop field, and the objective is to score five goals before your opponent. Both teams have several defensive and offensive players fixed to four rods. The goalkeeper is fixed to a rod by the goal, and two defenders are fixed to a rod next to this. The main role of the defenders is to safeguard the goal, however they can be used to shoot at the opposing team’s goal from long range. Five attacking players are fixed to a third rod, halfway up the table. Their basic role is to shoot the ball up the table towards goal, or move the ball so that the three attackers on the fourth rod, nearest to the other team’s goal, can score. Only a small ball is used, about the same size as a table tennis ball, however it weighs more than a ball used for ping pong, to stop it flying off the tabletop. If you want to know where to buy foosball balls, they are available from online retailers like Amazon, eBay and AliExpress.

What is a Foosball Table?

Foosball tables are oblong, with a shape that resembles a normal soccer pitch. They have a couple of offensive lines, a defensive line and a goal. Although the defensive or offensive position of the players can not be altered on the table lengthways, their position can be changed across the court widthways. At the beginning of each game and when a goal is scored, the ball is positioned at a central point on the pitch — just like it is in a normal soccer match. Each player controls the four rods that the men are fixed to. Frequently, on full sized tables, games are played with a couple of players on both sides, both operating two rods. Tables are available in several dimensions, however most tables have pitches measuring 1.17 meters (forty-six inches) by 0.68 meters (twenty-seven inches), with a height of 0.86 meters (thirty-four inches).

Foosball history is a fascinating subject. Londoner Harold Searles Thorton was the first person who patented a foosball table in 1923. The sketch of Thorton’s table is not unlike the foosball tables in use today. It had the same number of rods and players, and even curves on the corners were included to stop the ball rolling around during matches.

As far as tournament soccer foosball history goes, players have competed in arcades, schools, pubs, and even from the comfort of their homes. Many countries have hosted tournaments and professional players, who receive corporate sponsorship, compete for significant prize money. One of the best known foosball rules is that you are not allowed to spin the rods. Frequently, amateur players spin the rods all the way round, because this makes scoring easier. However, under official foosball tournament rules, this practice is forbidden. Goal scoring has straightforward regulations and rules. Whenever the ball enters the goal — a goal is counted. When the ball enters the goal, but then bounces out and returns to the field of play — this is counted as a goal as well. Goals can be scored with all the player figures on all rods. 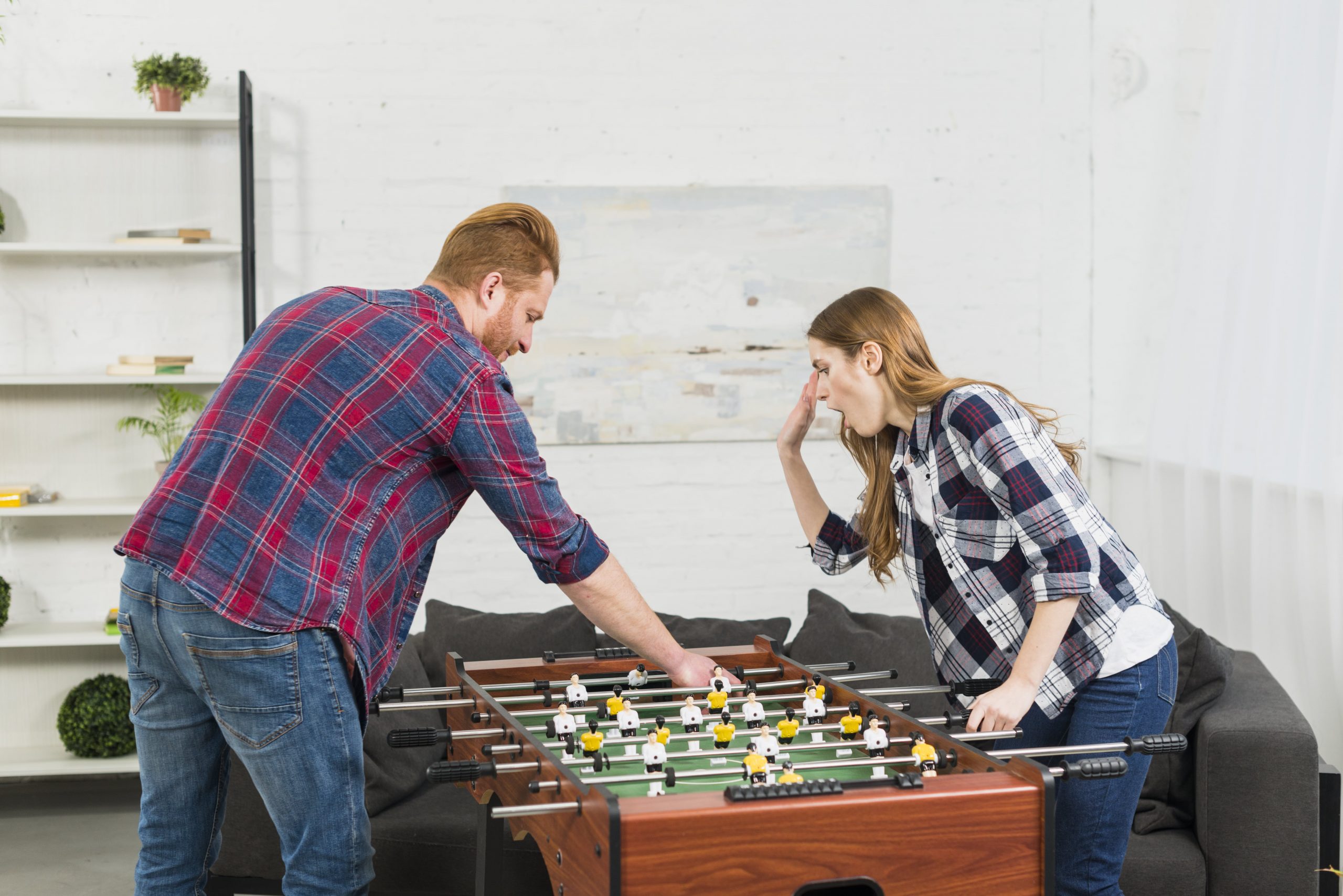 How to win at Foosball

There is more to playing foosball than turning the rods frantically in the hope of scoring. If you want to learn how to get better at foosball, the following advice should help. When it comes to defending, it is best to keep the players moving, rather than keeping them in the same place constantly. This presents fewer opportunities for the opposing team to score. You don’t have to move the players too much, but don’t allow them to remain stationary either. Another important tactic is to ensure that you keep the whole field covered. Avoid putting the players behind one another, because this creates open spaces that the other team can exploit. To make your attacks more effective, Snake Shots are a good way of hitting the ball hard without having to spin the rods. This open hand wrist shot causes the player figures to somersault backwards, before the ball is struck. This makes the figures turn fast, but they will not rotate 360 degrees.

What is Human Foosball?

Human foosball is a system borne out of the COVID-19 pandemic, which allows real football games to go ahead without risking the spread of infection. White chalk is used to divide the playing field into twelve oblongs, which each player is confined to. Under human foosball tournament rules, you are allowed to pass the ball between oblongs and dribble the ball inside your area. The amended game favors shooting and passing over footwork and running. Moreover, no tackles are allowed. Prior to the start of games, players have to clean their hands and shoes — then sign paperwork confirming their current health status. While on the pitch, players do not have to wear masks. When teams use one defender, that player is allowed to move across two adjacent oblongs. However, when teams take a more cautious approach and use a couple of defenders, both of these players have to remain inside their oblongs. Because space is restricted and physical contact is eliminated, games are more intense and free flowing. Players have to be more precise with their shots too.

Final Thoughts About the Foosball Game

You can quickly tell whether someone is new to the game of foosball, just by watching them play. Novice players turn the rods continuously, while attempting to shoot at goal. In contrast, seasoned players flick their wrists subtly to shoot or pass the ball. Although spinning is discouraged and officially against the rules, many players start off playing foosball in this way. Nonetheless, players who learn how to control the ball with wrist flicks always progress faster.